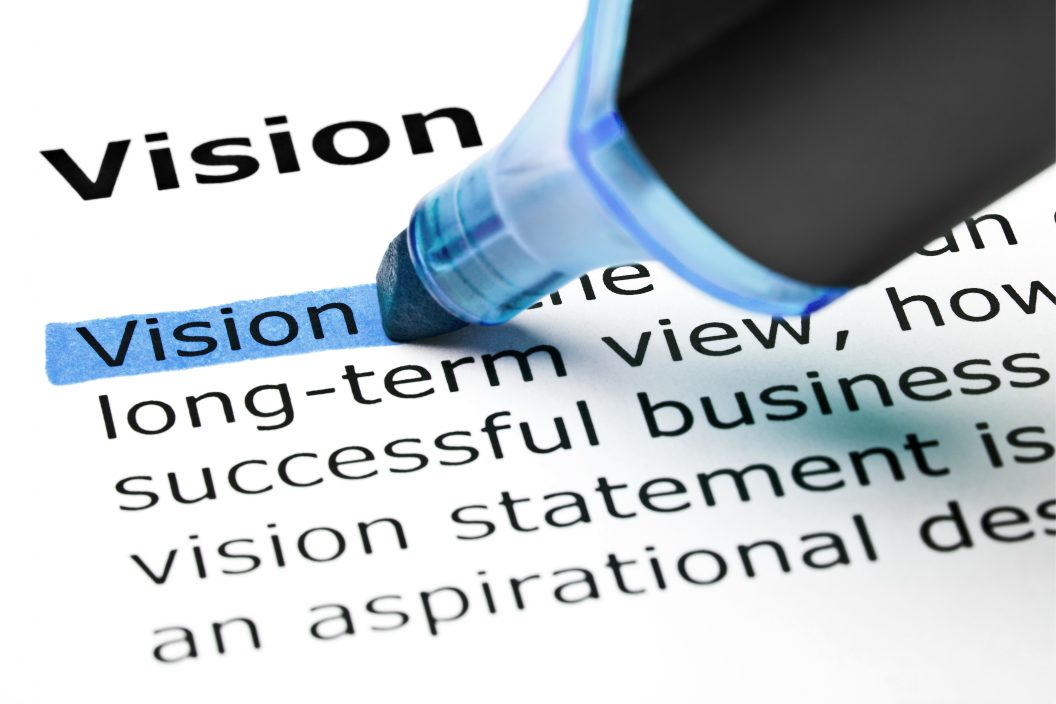 Conventional thinking on strategy is that you need to start by defining a vision, a future state that defines what you want your organisation to become, achieve or contribute. While visions are important – as are mission and purpose statements – they rarely live up to expectations. All too often they state the obvious: ‘to be better’, ‘to do no harm’, ‘to eradicate disease’ or ‘to grow in our chosen sectors’. Rarely are they articulated in ways that are clear, captivating and compelling to those who are expected to realise them. Visions that state the obvious have no meaning and damage the credibility of the leadership that defined them. What’s more, most visions aren’t visions, they’re aspirational statements and rarely do they describe what the organisation has decided not to do. Furthermore, vision statements often read as mission or purpose statements, which only adds to the confusion.

If visions are important do all strategies need a vision? I think so. But do all visions need a strategy? I think not.

In some cases, you could have a vision (or mission or purpose) that could be realised by continuing to do what you do now – only better. In effect, your strategy is to continue along your current trajectory. Those familiar with the Beyond Default approach to strategy will know that the essential purpose of strategy is to change the trajectory of an organisation, from one that’s taking it to its default future – which is a place it will end up if it takes no action other than that currently planned – to one that leads to an improved future. Strategy therefore is essentially about changing an organisation’s trajectory, to one that leads to an improved future – your vision.

Realising a vision involves making many decisions. If these decisions, once executed, are difficult, if not impossible, to reverse or undo, then they are truly strategic choices. If they can be reversed or undone, they are not strategic choices but planning or design choices that can be undone, albeit at a cost. It’s this distinction that determines whether you have a strategy or a plan.

When making strategic decisions there is rarely certainty. There is always an element of risk that the resultant outcome will be different to that expected or hoped for. While this risk can be reduced by making informed choices based upon available data, it cannot be eliminated. This is a key feature of strategy that makes it different to planning, and therefore needs to be approached in a very different way.

By way of example, you could have a vision for your garden – one where you can relax with a glass of wine on a summer’s evening, where there are vibrant colours in the spring and soothing colours in the autumn. Realising this vision could involve laying a lawn, planting flowers and shrubs, and fixing the fence. Equally it could involve extensive landscaping with a new patio, water feature and summerhouse. While the former does not involve any strategic decisions – though it could be expensive if you put plants in the wrong place – the latter does. If the patio proves to be the wrong shape or size, if the water feature doesn’t provide that calming effect, or if the summerhouse is too small or doesn’t catch the sun as you hoped, it would be difficult, if not impossible, to reverse or undo. While the former requires a plan to realise your vision, the latter requires a strategy.

One way of distinguishing between a vision that requires a strategy and one that doesn’t is to identify and define the ‘strategic intent’. For example, when President J F Kennedy instructed NASA “to put a man on the moon and return him safely by the end of the decade” the strategic intent was clear. One of the many strategic choices that had to be made to realise the strategic intent was whether to go with the single capsule advocated by Werner von Braun, one of NASA’s most powerful engineering leaders, or one that had two modules; a command module that would remain in Lunar Orbit, and a Lunar Module that would take the two astronauts to the surface of the Moon, advocated by John Houbolt, an engineer from NASA Langley Research Center. In the end they chose the two-module option, which proved to be the correct choice, and the rest is history.

More recently, when the UK Government (eventually) realised the challenges presented by the Covid-19 pandemic, its vision – though never articulated – was to get back to ‘normal life’ as soon as possible. To say this would have been stating the obvious and done nothing to build public confidence in their ability to manage the crisis. It did however declare a strategic intent (though it didn’t use this term) and that was ‘to stop people dying’. It didn’t know how to achieve this at the time, but as more became known about the disease the trajectory (of strategic intent) they chose was to get people vaccinated as quickly as possible. In this case declaring a strategic intent was more meaningful, and powerful, than declaring a vision.

The reality is that many organisations don’t need a strategy to realise their vision (assuming they have one). They need a well-thought-through improvement plan that’s well executed! They may call it a strategy, or strategic plan to give it importance, but all they need is a good plan.

One way of assessing whether your strategy is really a strategy, or a plan in disguise, is to list the choices it contains that are truly strategic. Equally, if there are strategic choices embedded in your improvement plan then it’s actually a strategy and needs to be treated as such.