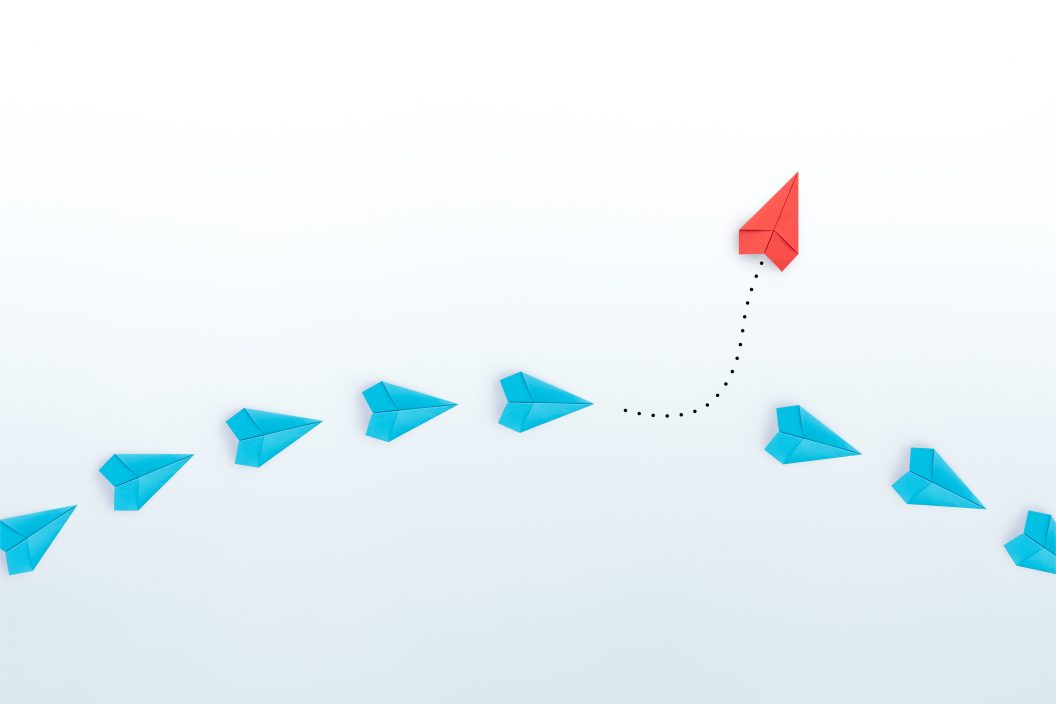 If the strategic intent is to change trajectory, then it’s perfectly reasonable to assume that the organisation will need to operate differently than it has in the past: the thinking being that if an organisation continued to do the same things, in the same way, it would continue on the same trajectory – leading to its default future.

Changing trajectory therefore involves doing very different things or doing the same things very differently, or both. Which is the essence of innovation. Originating from the Latin verb ‘innovare’, which means ‘the introduction of new things, ideas or ways of doing something’. It’s not about improving something that you’re already doing, it’s about doing things completely differently. Equally, it’s not about invention, which is the creation of something that has not existed before.

Innovation can occur in all facets of an organisation, whether in products and services, roles and responsibilities, processes and technology, or relationships with suppliers and partners. There are no bounds to its scope. But the key question is what is the purpose of innovation? In our view it’s to realise an organisation’s strategic intent.

Innovation is not an end in itself – but a means to an end. It’s a way of changing what an organisation does. In our view it’s highly unlikely – if not impossible – to change the trajectory of an organisation without some degree of innovation.

As previously stated, innovation is not the same as invention. Innovative ideas could exist in other organisations; it’s their application in a context where they’ve not been used before that makes them innovative. As to whether this is legally possible is another matter as they may be subject to patent protection.

Innovation therefore plays an important role in successfully realising an organisation’s strategy. However, lack of innovation is often cited as one of the principal reasons why most strategies don’t deliver their intended outcomes.

According to Professor Sanjay Sarma at MIT there are four threats to successful innovation:

These are four excellent examples of the endogenous forces that have the potential for anchoring an organisation to its current trajectory. Endogenous forces are those that originate from within the organisation and result from past management decisions and actions. Collectively they act to create a context that either stifles or fosters innovation.

The key question is can the influence of these endogenous forces be changed? Can those forces stifling innovation be weakened or eliminated and those fostering innovation strengthened? In our view yes. Innovation is an organisational capability, a capability that can be developed, and the best way to start is to look outside your organisation. Learn what other organisations – both within and outside your sector – are doing. Bring in people with diverse backgrounds and experiences who can challenge why things are done the way they are. Take a hard look at the endogenous forces that are stifling innovation and take action to reduce or eliminate their influence. At the same time identify those forces that foster innovation and strengthen them. And don’t forget that most innovations today are digitally enabled, so build your digital capability.

Building innovation capability is not easy and will take effort. At times it will also feel uncomfortable and create a sense of losing control. But if you’re serious about securing your destiny and ‘going beyond your default’, it’s an organisational capability that you must develop.

During the Covid-19 pandemic we saw many organisations, large and small, coming up with innovative solutions. Universities and schools came up with new ways of teaching, doctors found new ways of consulting and treating patients, and many retailers found different ways of serving customers, resulting in an explosion of ‘Click and Collect’. Perhaps the most powerful examples are in the way the world responded to Covid-19. Test, track and trace systems were created from scratch, clinicians found already existing antivirals to treat those suffering from Covid-19, vaccines were developed and tested in record time, and an army of people were mobilised to administer them. Were all these innovations successful? Definitely not, but collectively they changed the trajectory of the pandemic – for the better.

Of course, for some organisations – particularly start-ups – they don’t have the legacy of the past anchoring them to their current trajectory. They can apply innovative ideas to set a completely new trajectory, the most familiar examples include Uber, Airbnb, Instagram, Deliveroo and Pinterest, plus UK-based digitally-enabled challenger banks like Atom, Monzo, Revolut and Starling. Equally, it could be argued that had these organisations not mapped out a trajectory aimed at realising their innovative strategic intent, their default future would have been to get no further than having an idea.

To quote British economist John Maynard Keynes and French novelist Marcel Proust, “The difficulty lies not so much in developing new ideas as in escaping from old ones” and “The real voyage of discovery consists not in seeking new landscapes, but in having new eyes”.

Peter Boggis
Co-author of Beyond Default