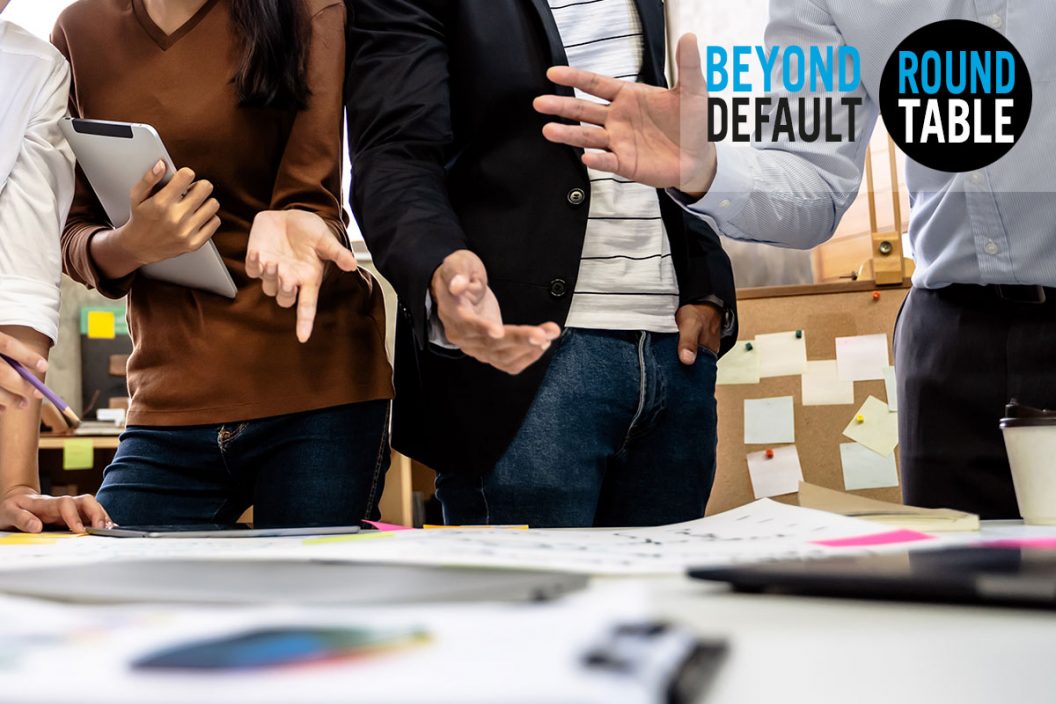 The aim of the Beyond Default Roundtable discussions is to give experienced practitioners in strategy and change an opportunity to share their experiences, challenge conventional wisdom, brainstorm ideas and network with peers who have the same interests and challenges.

In May 2021 a small group of invited executives and consultants met virtually to discuss the impact of exogenous forces on strategy. The discussion was led by David Trafford, co-author of Beyond Default, and moderated by Chris Hallam, founder of CH Coaching Solutions.

As the Roundtable followed Chatham House Rules, the summary below only attributes information that is in the public domain.

Moderator: David, could you kick things off by telling us why you picked this topic?
Discussion: Exogenous forces are extremely important. They are the often-unforeseen forces that take your organisation to a different place; they change the context within which your organisation operates in ways that you don’t necessarily notice. It’s a phenomenon similar to what’s experienced when you’re in a hot air balloon. When you’re in a hot air balloon it’s eerily quiet, you don’t notice the wind on your face or any sense of movement. The reason is that you’re literally ‘going with the wind’. It’s only when you look down that you appreciate the distance you’ve travelled and how the landscape has changed. For many organisations it’s the same: in this case it’s the influence of exogenous forces that’s changing their context. A change in context that may not be noticed until it’s too late to take effective action. Many years ago, Charles Handy described this as ‘the boiled frog syndrome’. If you put a frog into ‘frog warm’ water it will do nothing, just swim around. If you then slowly heat the water the frog will compensate for the change in temperature but not try to jump out. The frog will continue to do this until the water becomes so hot that it becomes a boiled frog! By contrast if you placed a frog in either very hot or very cold water it would immediately try to jump out. Blockbuster is a good example of a very successful company that experienced the boiled frog syndrome. After early years of phenomenal growth its context began to change as a result of the growth of broadband and the ability to stream movies into the home. Blockbuster initially ignored this context shift and when it realised it needed to respond it was too late. Ironically, at its peak it had the opportunity to acquire Netflix, but declined!

Moderator: What exogenous forces are we noticing now?
Discussion: The most obvious one impacting the world today is the COVID-19 pandemic. No one foresaw it coming, and its impact has been rapid and profound. The influence of most exogenous forces is less obvious, which is probably the reason most leaders tend to focus on what’s going on internally rather than externally. As a result, they are less likely to see how the context within which their organisations operate is changing. Examples of exogenous forces that could have a profound impact in coming years include central bank digital currencies, the economic growth of China and Asia, economics of mutuality, climate change, consumer demand for ethical sourcing, the breaking down of the regulatory frameworks of nation states, the push-back against globalisation resulting from its impact on the globe’s carbon footprint, and the expectations of the younger generation to take a more proactive approach to protecting the planet. It’s also important to recognise that the influence of exogenous force have second- and third-order consequences, all of which need to be assessed. Leaders of all types of organisation cannot control exogenous forces – they can only respond to them. The key question is will they do this in time or before being forced to do so by changes in government policy and regulation?

Moderator: Is there a flipside to exogenous forces where they open-up opportunity?
Discussion: Yes, and an excellent example is the rapid development of digital technology. It’s an exogenous force that’s opening-up tremendous opportunities for all sorts of organisations, provided their leaders recognise and embrace it. Digital technology has now reached a state where it’s possible to do things that we could only imagine 10 or 20 years ago. A case in point is how we have coped with the recent pandemic. Ten years ago, we would not have been able to work from home like we have over recent months. It could be argued that one of the upsides of COVID-19 – and there aren’t many – is that it has forced us to rethink the way we do things. A good example is in the delivery of health services. In recent months we’ve seen remote consultations – using digital video technology – become the norm. Hospitals are also fundamentally rethinking how they organise themselves to deliver more patient-centric care. And for many who found it difficult to engage in face-to-face group meetings, the use of Zoom has given them a voice and opportunity to contribute in ways they previously felt was not possible.

Moderator: Moderator: Can we really predict the impact of these forces?
Discussion: While we can’t predict the future, we can get some clues as to how it might unfold. The science fiction writer William Ford Gibson
once said, “The future is already here, it’s just not very evenly distributed”. If we believe this to be true, then all leaders have an obligation to get out there and see if they can find these clues. The truth is if we don’t look for them, we won’t find them. There are people who specialise in doing this, and they’re called futurists. One such person is Ray Hammond, who recently undertook several studies for Allianz Care on the likely future developments and trends in healthcare between now and 2040. Another classic example is the pioneering work of Royal Dutch Shell who in the 1970s developed scenarios for the energy sector and their business, and more than 20 years ago BT was experimenting with remote working – but the technology wasn’t quite ready! More recently, developments in artificial intelligence can help us see patterns that we were previously blind to. While we cannot predict the future with any certainty, we can get some insight by asking the simple ‘what if’ question. The key is being curious about the future, rather than frightened by it. While many believe there are people who can see and shape the future, for example Steve Jobs, the reality is that what they really understand are the influences of the (exogenous) forces that are defining the trajectory we are travelling. This understanding enables them to extrapolate into the future. One thing these people do have in common is that they don’t talk about the near future, they talk about how things will be 15, 20, 40 years’ time.

Moderator: How do we get people to take these forces seriously?
Discussion: People, particularly intelligent, experienced people, only really learn from their experiences when they are out of their day-to-day context and emerged in something completely different. It’s when they’re stretched, intellectually, emotionally and physically that they learn the most. It’s in situations where they realise there’s a very different world out there, one that’s driven by a different set of dynamics. Therefore, the only effective way of getting leaders to take exogenous forces seriously is to get them to experience them. There are many ways of achieving this, one of the most effective being experiential learning journeys, or study tours, where a group of executives ‘get out of the village’ and experience the future from a different perspective – in the way that William Ford Gibson described. This often involves them experiencing shock, which in turn interrupts their default thinking and forces them to see a different reality of the future. It also triggers them to ask “what are the implications of what I’m seeing on the default future of my organisation?”. The quote by Richard Pascale, “People are more likely to act their way into a new way of thinking, than think their way into a new way of acting”, sums it up nicely.

Moderator: Is there not a danger that we look at an exogenous force and think we know what’s going to happen?
Discussion: This is a real risk because we all tend to ‘look where the light is shining’ or, to put it another way, we all have conformation bias. In Beyond Default this phenomenon is illustrated by the story of a man who had lost his car keys. The story goes that one dark evening a passer-by saw an elderly man searching through the grass under a lamp post. He asked, “Have you lost something? Can I help?” The man replied, “I’ve lost my car keys.” Feeling sorry for the old man, the good-hearted stranger joined the search. After a while, and with no success, he asked, “Where were you when you lost your keys?” “Over there by my car,” the man gestured. The passer-by was puzzled and asked, “If you lost your keys over there, why are you looking for them over here?” The old man replied, “It’s dark over there, and the light’s much better over here.” It’s natural for us to look where the light is shining, where we understand what we see in ways that give us confidence to act. For us to look where the light is not shining, we need to free ourselves from the shackles of constraints. Only by doing this can we see things differently and come up with ideas that were previously inconceivable.

Moderator: Thanks for participating and your contribution to a lively discussion.

If you have any points that you would like to raise with David, please do so by emailing him at david.trafford@formicio.com.