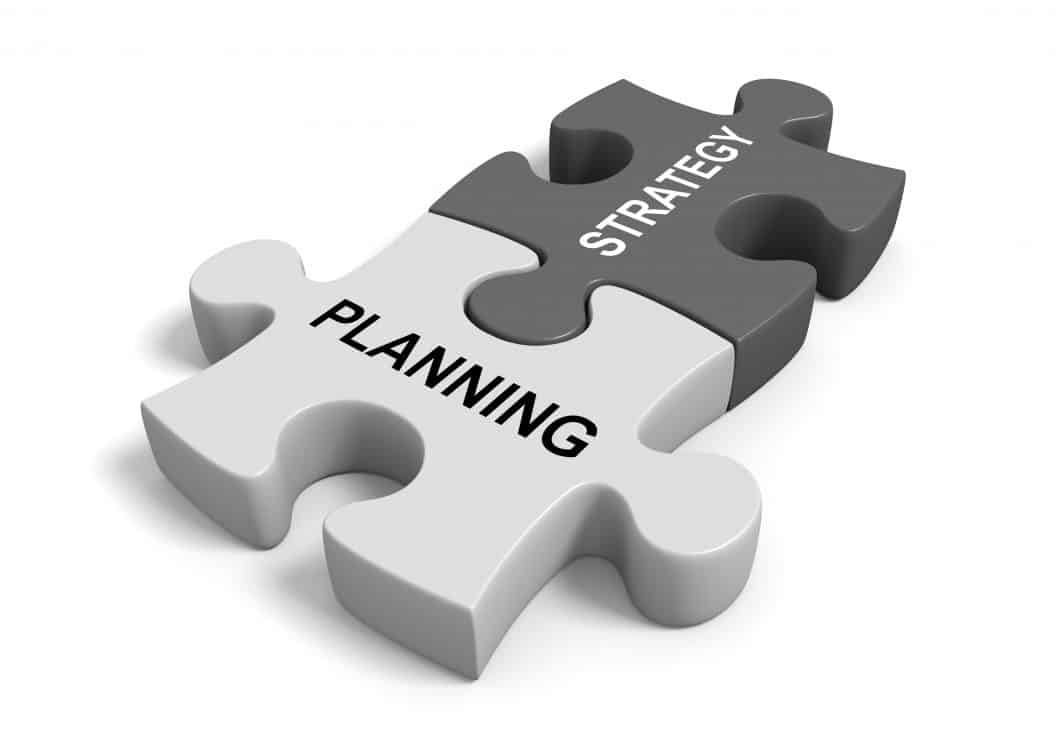 The words strategy and plan are often used interchangeably. People talk about their ‘plan’ or ‘strategy’ as if they were the same thing and some, in an attempt to make their plan more important, call it a ‘strategic plan’. The reality is that a plan and strategy have very different meanings: they are based upon different decision criteria and contain different information. There should, however, be one important relationship between them, and that is a plan should always be based upon a well thought through strategy.

One of the reasons for the confusion between a strategy and a plan is that they do serve a similar purpose, which is to describe what needs to be done to create a different future. A future that is better than the default, which is the place things will end up if no action is taken, other than that currently planned. Another similarity is that strategies and plans are based upon a set of choices. Choices that define how the current trajectory should be changed – to one that leads to an improved future. Importantly these choices need to be informed choices based upon an evaluation of all available information – rather than based upon personal preferences or cognitive bias.

A common reason for the misuse of the terms is that strategies are often executed via a plan defining a set of activities that need to be executed overtime. Activities that are aimed at achieving the strategic objectives. The plan – often call the ‘transformation plan’ when the strategic objectives are ambitious – understandably becomes the focus of attention. Resources are assigned to it and management time is devoted to tracking progress and resolving issues. While this is completely understandable a common unintended consequence is that the strategy, which the plan is intended to deliver, often gets forgotten.

Its often not appreciated that all plans are based upon a strategy. In some cases, the strategy is explicit and in others it’s implicit. The strategy may be considered proven if it has been successfully applied before, or it may be newly developed and therefore unproven. The risk is that in the desire to get to a plan, insufficient thought is given to the strategy. As a result, the strategy upon which the plan is based could be flawed and, even if the plan is executed flawlessly, the resultant outcomes may not be what were intended. It’s here that the distinction between strategic and planning choices – and the resultant strategy and plan – becomes important. Let’s illustrate this through a couple of case studies.

Westfarmers’ acquisition and transformation of Homebase

In 2016 the Australian retail-to-coal conglomerate Westfarmers acquired the UK DIY and hardware retailer Homebase from Home Retail Group for £340m. At the time it committed to investing a further £500m in the business. The plan was to rebrand the stores to Bunnings Warehouse, change the products on offer and transform the customer experience. By all accounts the plan was well executed, stores were rebranded, their layout reconfigured and the product range revamped. Soft furnishings, that were popular with Homebase customers, were out and no-frills products, like DIY sheds, were in. The only problem was that customers did not like what was on offer. The strategy underpinning the plan, of replicating what was successful in Australia, was flawed. In 2018 Westfarmers cut their losses and sold Bunnings Warehouse – and the yet to be rebranded Homebase stores – to restructuring specialist Hilco for £1. In all Westfarmers lost about £1bn, making it the most disastrous retail acquisition in the UK ever.

Grenfell Tower was a 24-storey block of flats in North Kensington, West London. It was designed in 1967 in the Brutalist style and constructed from 1972 to 1974. In 2015-16 it underwent a major renovation, the aim of which was to improve heating and energy efficiency, and the external appearance. During the renovation the tower received new windows, a water-based heating system for individual flats and new aluminium composite rainscreen cladding. Before work started the original contractor was dropped because their price of £11.278 million was £1.6m over budget. It was put out to competitive tender and the chosen contractor undertook the renovation for £8.7m. By all accounts the renovation was executed to plan.

On 14 June 2017 at 00:54hrs, a fire broke out on the fourth floor. It spread rapidly up the building’s exterior, bringing fire and smoke to all the residential floors. This was due to the building’s cladding, the external insulation and air gap between which created a chimney effect. The fire resulted in 72 deaths, with more than 70 others injured. It was the deadliest structural fire in the UK since the 1988 Piper Alpha disaster and the worst UK residential fire since World War II.

While the contractor may have executed the renovation as planned, the plan was based upon a flawed strategy of using cladding materials that later failed safety tests. By November 2019, the UK Government had identified 446 residential and publicly-owned buildings in England over 18 metres in height with cladding of the kind used on Grenfell Tower. By June 2020 this had risen to around 2,000 with a further 9,600 high-rise buildings thought to have combustible cladding; and 100,000 between 11 and 18 metres whose status was unknown. While the intent of the strategy was laudable – to create a better living environment for the occupants of the tower – the strategy itself was flawed as it created a situation that was much worse than if nothing had been done.

The difference is one of purpose

The essential purpose of a strategy is to change an organisation’s trajectory, from one that’s currently taking it to its default future to one that takes to an improved future. It’s a process that involves making informed choices on what the future trajectory should be and how the current trajectory can be best changed.

The essential purpose of a plan is to define the activities that need to be undertaken to change the current trajectory in line with the strategy, thereby realising the targeted improved future. It’s essentially a design process that decides what activities need to be undertaken over time, addressing dependencies, and assigning resources for their successful execution. Throughout there needs to be a clear line of sight between what is executed in the plan and the strategy it aims to realise.

If a plan starts to unfold it’s important to understand why. It could be the result of poor execution of the plan, a badly designed plan or a flawed strategy upon which the plan was based. It could also be that the context upon which the strategy was based has fundamentally changed, thereby making it – and the plan – no longer valid and in need of revision. Only by understanding these distinctions will we be better able to improve the chances of delivering successful strategies and transformation programmes.