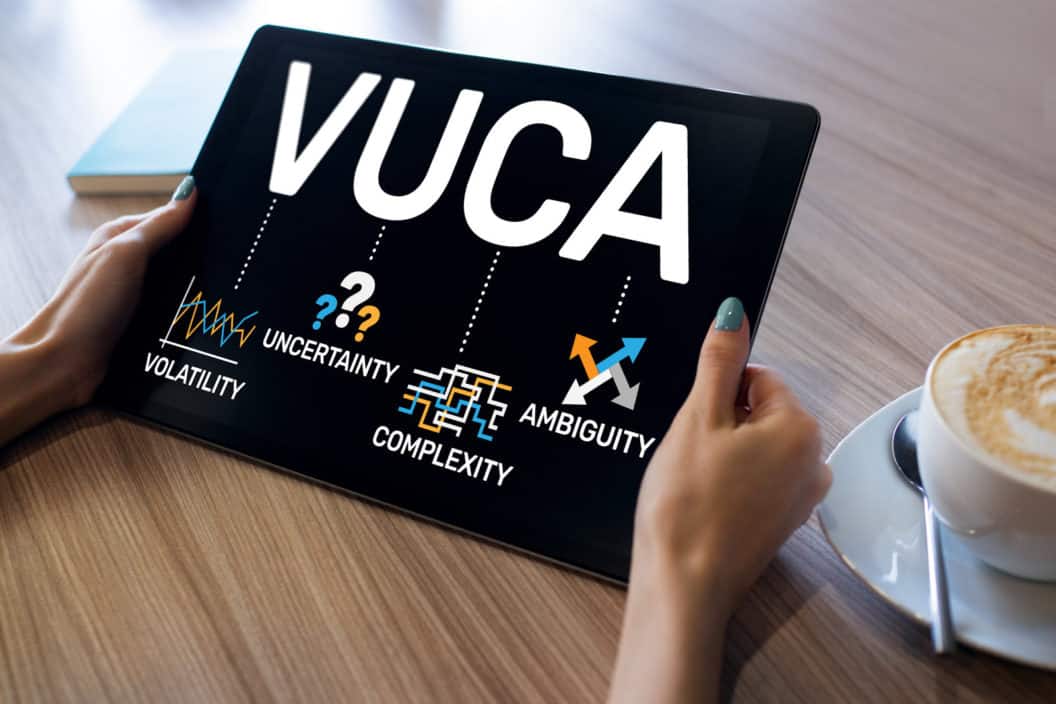 Developing strategy and delivering change continue to be a challenge for many organisations. As a result, many leaders are shifting their focus from strategy to agility. The logic is that if their organisations were agile they would be more responsive to change and strategy would not be needed. While there is some merit to this argument, being agile is not the complete answer and the value of having a clearly-thought-through strategy should not be underestimated. Without a strategy the best an organisation can be is responsive. The question therefore is not whether an organisation needs a strategy but whether traditional approaches to developing and executing strategy are appropriate in today’s increasingly volatile, uncertain, complex and ambiguous (VUCA) world?

Traditional approaches to strategy typically begin by defining a vision that is then realised through the execution of a change programme. The problem with this approach is that it assumes:

It also assumes that the organisation’s leadership is aligned, both in terms of the need for a new strategy and how the resultant strategy will be executed.

In their book Beyond Default, David Trafford and Peter Boggis argue that the essential purpose of strategy is to change an organisation’s trajectory, from the one taking it to its ‘default future’ to one that takes it to an improved future. They describe a default future as the place an organisation ends up if its leaders take no action other than that currently planned. They also argue that developing a successful strategy involves assessing the influence of the exogenous forces that are changing the context within which an organisation operates, exploring emerging strategic opportunities and making an informed choice on strategic intent. They also make the point that a strategy is only of value if it is successfully executed, which is about turning strategic intent into operational reality.

New approaches to strategy development and execution are needed

Traditional approaches to strategy and change were developed in a different age, one where, to a large degree, the future was a continuation of the past. It was before the knowledge economy took hold, where wealth was created from resources and factories rather than the knowledge and skills of individuals. It was when talent was readily available and peoples’ expectation of work and their contribution to the future direction of the organisation were very different. Today’s context – often described as the VUCA world – is very different and requires new approaches to strategy and change that are cognisant of the everchanging conditions within which organisations operate today.

New approaches to developing strategy and executing change should not be linear, starting at step 1 and concluding at step n. While some things do need to be done before others, it’s more important that a set of conditions are established from the outset that enable an organisation to adapt its strategy and modify its execution plan as circumstances change. These conditions include:

The conditions are interdependent

The seven conditions described above individually contribute to a new and different approach to developing and executing strategy, one that’s more relevant to the fast-paced VUCA world that most organisations operate in today. But they don’t work in isolation. For example, it’s not really possible to have adaptive execution capability if the organisation doesn’t have an agile digital platform. Equally, if the strategic intent is not clear, self-organising teams will not have clear criteria by which to prioritise change. Furthermore, if the operating principles are not defined there is no guidance on what the changes should contain. Also, if there is not an experiment and learn mindset the result will be more of the same. And finally, without collective leadership there will be no one single strategic intent and the organisation will be pulled in many different directions.

All seven conditions – and possibly more – therefore need to be in place.

Our final thought comes from Don Tapscott in his Foreword to Beyond Default: “This is not a time for tinkering. Strategy is coming to the fore once again.” Are you and your organisation ready?

Frank Dannenhauer
Digital transformation strategist and advisor. Frank can be contacted at frank.dannenhauer@icloud.com.